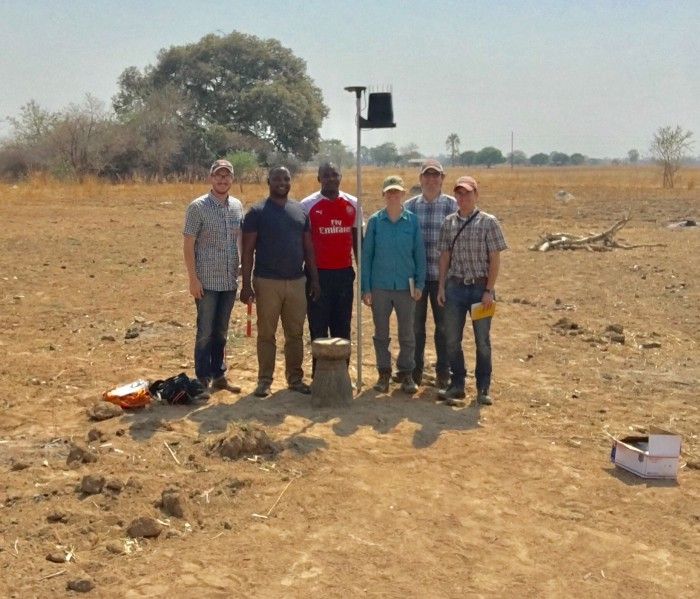 The team in Zambia putting out Arable’s Pulsepod devices before maize seasons, which report back key agricultural indicators including crop yield, health and climate data.

In the United States, precision agriculture is being rapidly embraced by the food industry to grow more with less, create the perfect plant and make the food supply chain more efficient while reducing the negative impacts of farming that frequently contribute to climate variability. What makes this time exciting for global food systems is how low-cost solutions and greater connectivity allow these technologies to be accessible across emerging markets. The World Bank actively pursues low-cost sensor technologies and big data approaches that can help farming communities more adeptly monitor natural resources. Similarly, USAID recently ran a four-part series examining the potential off sensors to augment crop yields, with an eye towards adoption success in smallholder communities.

Zambia, one of USAID’s Feed the Future countries, is well-positioned to take advantage of these new technologies, often cited as having “the potential to be a breadbasket for southern Africa.” Compared to neighboring states, it enjoys relative political stability reflected in its rising tourism industry and increasing amount of foreign direct investment. Still, smallholder farmers, which make up the majority of the population, are wary of the exacerbated impacts of a changing climate, and keen to better understand the risks. An NSF-supported partnership between Zambia Agriculture Research Institute, Princeton University, University of California Santa Barbara, Indiana University and Arable Labs focuses on improving local understanding of nuanced microclimates as they respond to human and environmental drivers over time.

“We are trying to understand how agricultural production can be increased, or even maintained, under the incredibly variable climatic conditions that are occurring, and whether this necessary agricultural development can be achieved at much lower environmental cost than conventional modes of agricultural development (in order to avoid further exacerbating climate change and losing crucial ecological services)”, explains Dr Lyndon Estes, a Research Scientist at Princeton University.

Just last week the team set out Arable’s Pulsepods, a low-cost tool to monitor the microclimate in real-time, allowing both the researchers and farmers to examine data at greater granularity to improve crop models, bias correct meteorological products and connect to and upscale estimates using satellite imagery. 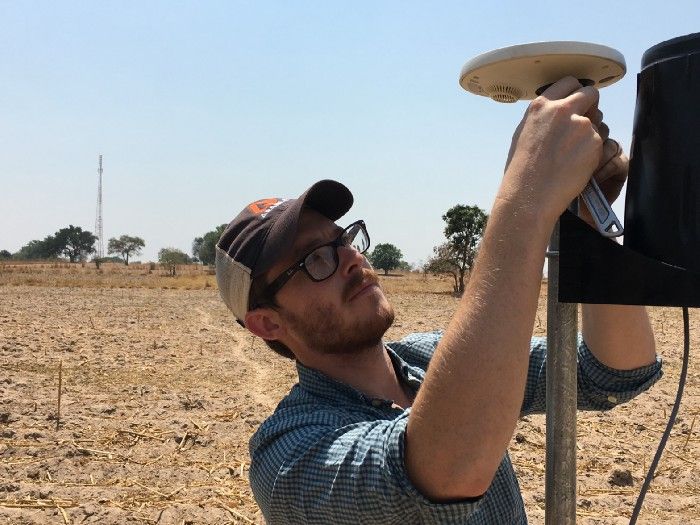 Taylor Thomas (Arable Labs) sets up a Pulsepod over a field that will be planted with maize next month.

Dr Tom Evans, Professor of Geography at Indiana University describes the ‘data desert’ in the region, “The meteorological instrumentation network in sub-Saharan Africa is worse today than that in the United States more than 100 years ago. Our project delivers sub-daily data through mobile phone networks allowing the density of meteorological instrumentation to be increased at much lower cost than was required to build the United States instrumentation network — and in a way that provides, effectively, real-time information to farmers, agricultural extension agents and government officials.”

The team has specifically selected a small and targeted project, working with roughly 700 farmers in the Southern province of Zambia (about three hours by car from Lusaka). The project design heavily scrutinizes the relationship between precipitation and local land management practices, relying on farmer observations to contextualize the rich data and elucidate beneficial trends. The overarching goal is to improve agricultural decision-making as well as create opportunities for programs such as crop insurance that can help farmers cope with crop failure in drought years.