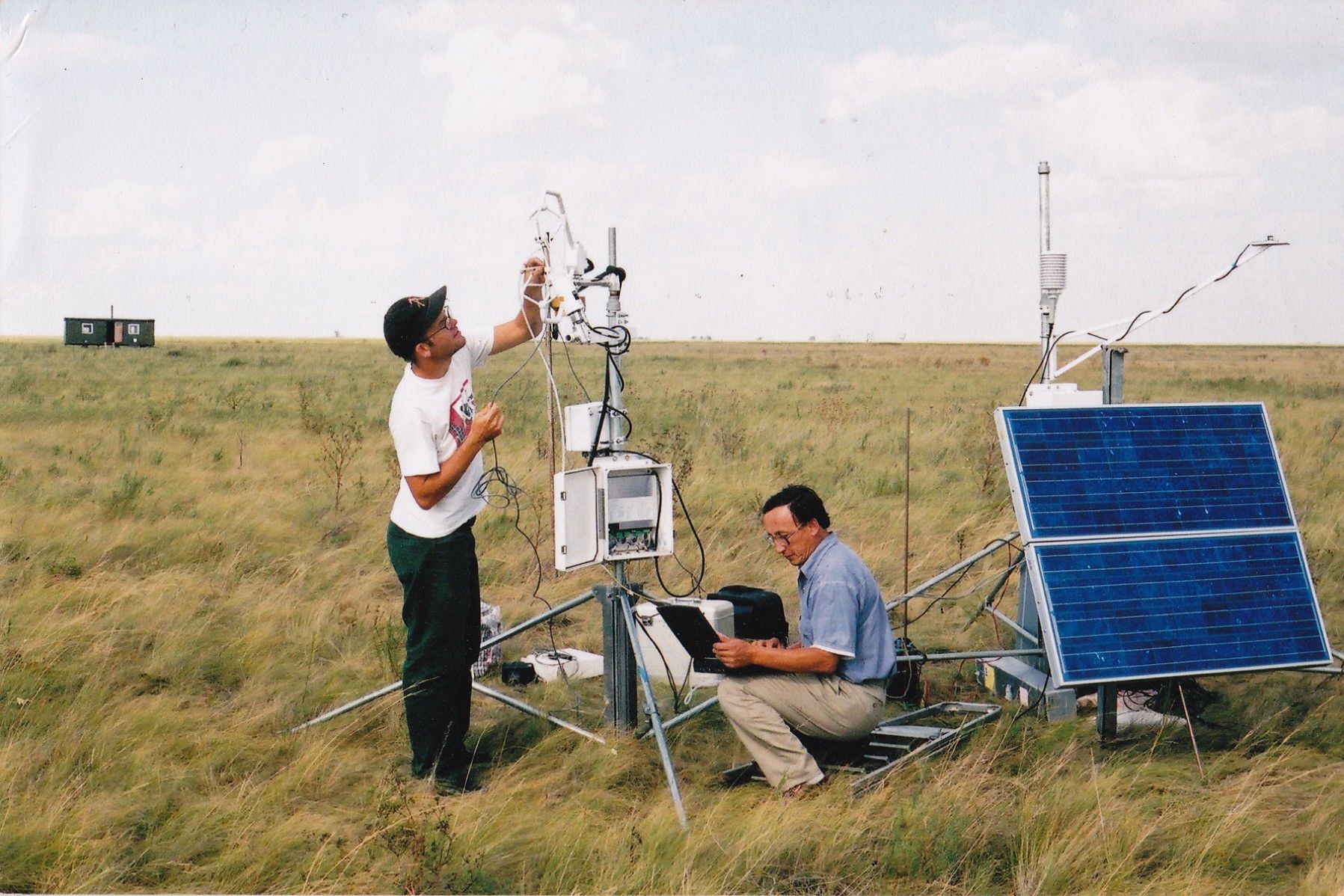 If you asked me why I started this company, and I was speaking unfiltered from my gut, I would say because I have experienced such agony installing equipment from the usual cast of weather station manufacturers.

To be sure, at one time I was so into this stuff. Who doesn’t like gear? And this stuff is the momma of weather station gear: we shipped $150K of equipment out to Kazakhstan circa 1999 and were so proud of the sheer complexity of the endeavor that we took to posing on the steppe doing the things that seemed so high-tech at the time, so demanding of my higher education. 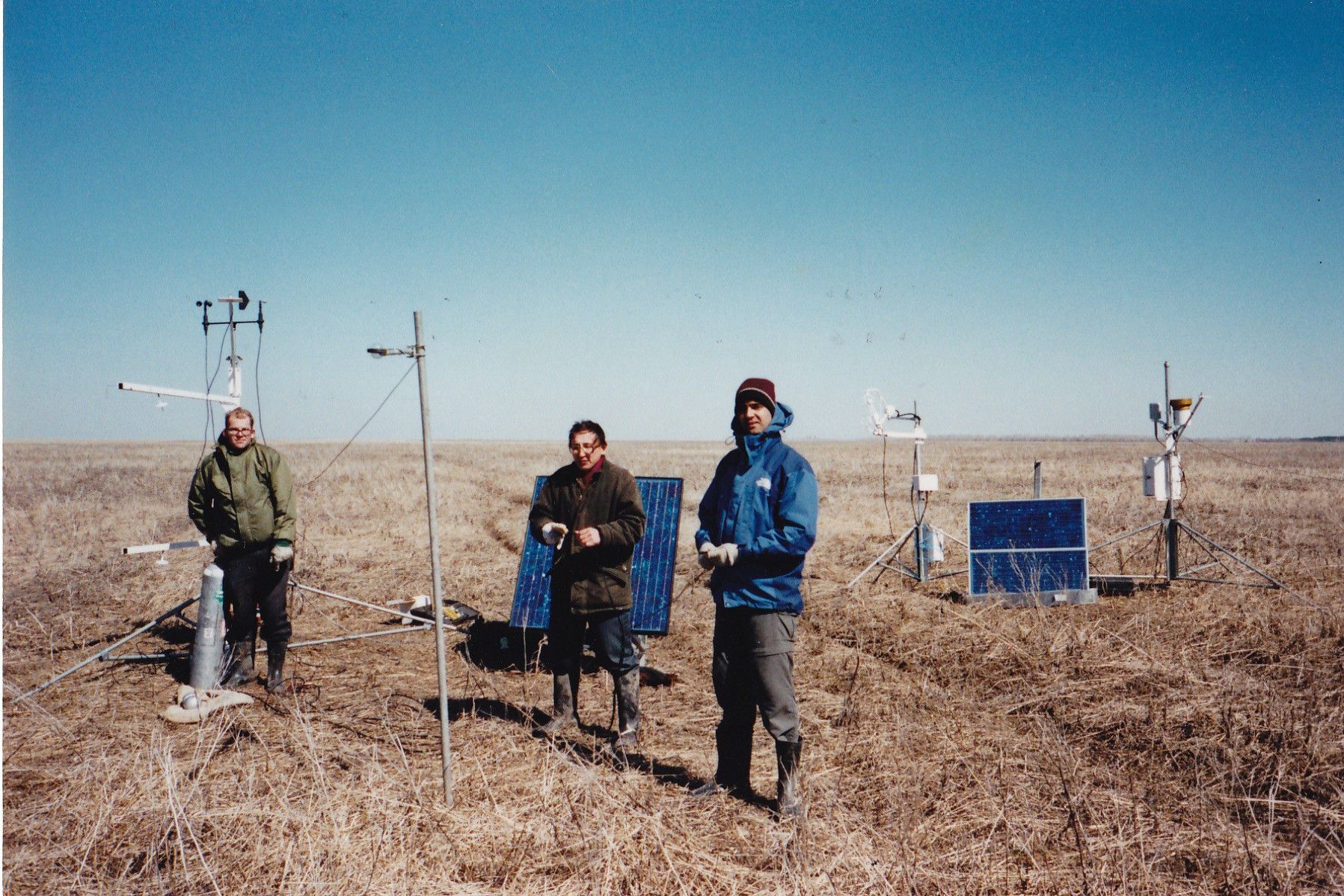 It was easy to lose sight of the fact that we spent about a quarter of our time replacing truck batteries that were stolen, or swapping out guards stationed to protect said batteries, or waiting for replacement parts to clear customs. Well easy to lose sight of, until it was time to try and write a paper with such extensive gaps that the research papers were devoted to innovations in gap filling.

Fast forward 15 years, and you’d be shocked but that same equipment is nearly unchanged, even as the world moved on with such hits as Windows 2000, Google Search, cellular telephones, USB . . . you get the picture. 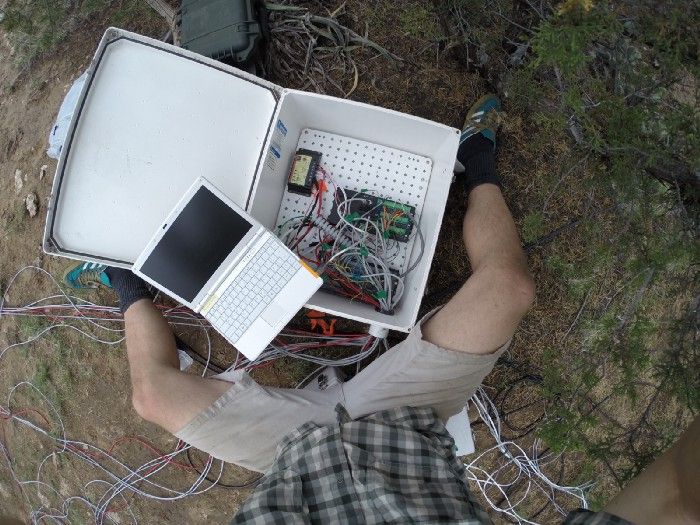 Some of the highlights of my last field deployment included 12 hours of literally unwrapping and rebundling cables just to attach a dozen thermometers to a data logger. These same cables cost $4000, 15 percent of the total project budget. The program to measure said thermometers was developed by a specialist in New Zealand with all kinds of multi-plexing and whatnot to reduce the need for more dataloggers. Connecting all those wires in the field, I almost started a brushfire by reversing the polarity on one set of wires while the other end was resting in dry tinder. Thank goodness southwest pine needles are so aromatic! 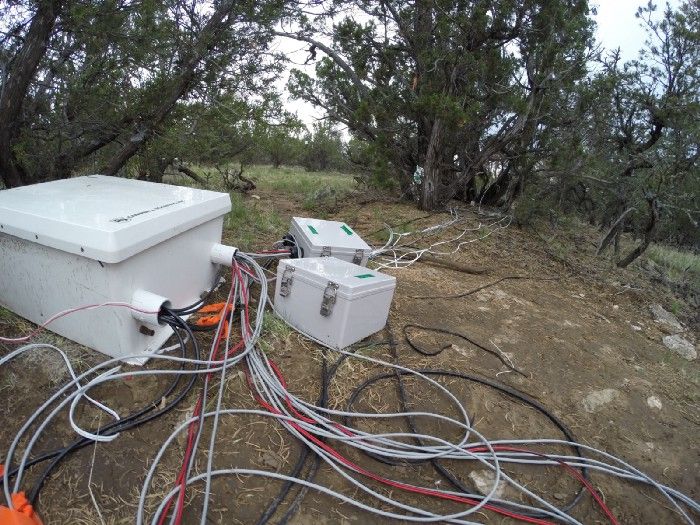 More recently, in the midst of all our engineering of the completely-made-from-scratch Pulsepod, we had occasion to set up one of these old met stations as part of the calibration/validation process. I’ve since delegated all datalogger programming to long-suffering Taylor!

It started with assembling the bits and pieces of dataloggers (is this one word or two?), humidity probes, quantum sensors, pyranometers, 4-way net radiometers and the like. Gathering it all together I was reminded of how bulky this junk is: 2.5 cubic feet of odds and ends, packed into three packages weighing 20 lbs. How much might that cost to ship you might ask? Well, it seems the two-day “saver” puts us in the $115 neighborhood. I had to laugh though, because this is already something like a quarter of the cost of the Pulsepod itself, and all it is doing is getting it from New Jersey to Nebraska. 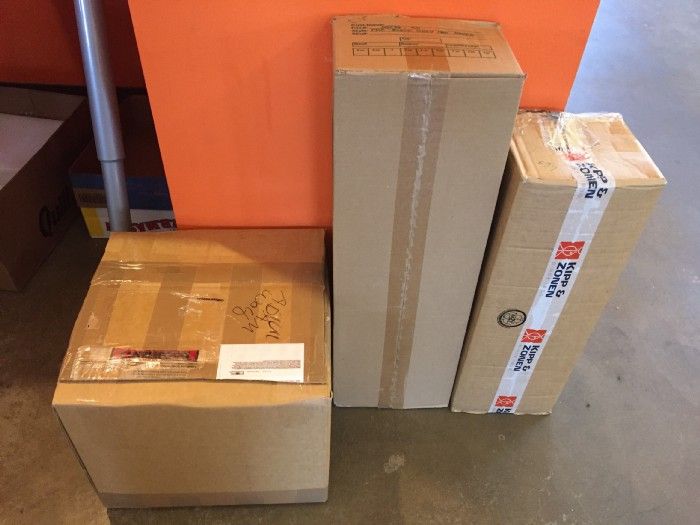 God forbid we should try to send this to Africa (or Kazakhstan!). And I should point out that this is not the cost the factory would charge you, because the amount of insulation metastasizes the shipping problem tenfold, into a gazillion bulkier packages that are then a headache to dispose of. (Just for reference, that pile of cables up above cost $2250 in shipping from New Zealand.)

Well, so far so good: we’re going to install all those things and have a really bonafide weather station out there. Not so fast! You see that old laptop up top? You still need one of those guys to connect to the datalogger, but while you used to be able to buy a ThinkPad with a serial port to connect, now you have to have a special USB-to-Serial cable.

Savvy scientists know though, that it’s not just any RS232 cable, you need one with the pins configured in a particular way (this was before the “universal” serial bus). Oh, and your computer may not even have drivers to operate such an archaic piece of equipment. 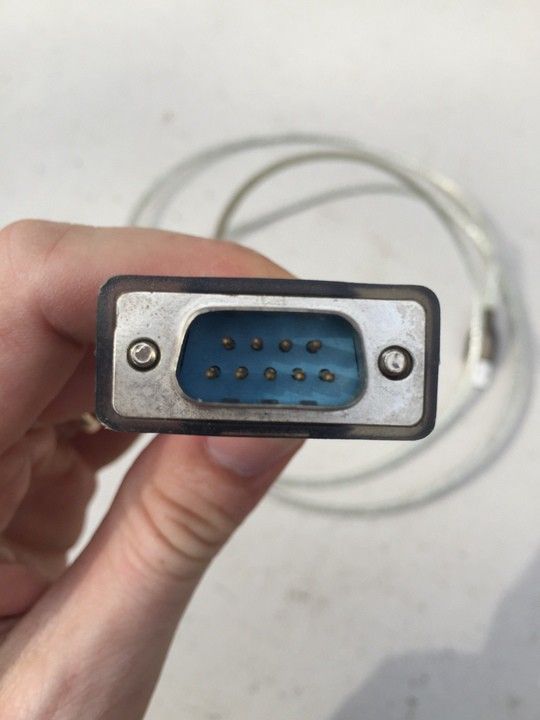 Which brings us to programming this datalogger, which is why you need the serial cable. Doh! You need a special piece of software available only on CD, and it’s not the CD that I sent out to Nebraska, but another CD kicking around the lab.

I never told you the coda to that New Mexico deployment: For all the sophistication of the logger program, it actually failed to work, and we ended up collecting no data for the entire field season. I think that kind of broke my spirit. 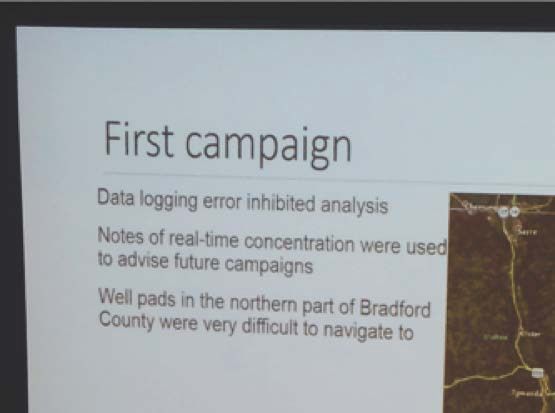 But bad loggers are just one part of a broad spectrum of heartache. Rats chewing through the cables. Leaves in your rain gauge. Target practice on your logger box. Stolen solar panel and battery. It is no consolation to know that your battery is not stolen when it declines and slowly winks out without you knowing, because your logger has no connectivity and couldn’t alert you. (Also you have to replace that battery, because once it drops below 7V it won’t come back!)

To be fair, a logger that is up and running can last for a long, long time with proper maintenance. But for every one of those, there are ten students who wasted their summer with data that never got collected, and now they have to think of something else for their thesis project, a bitter prize after wasting so much time begging some funder to give them money to do that field experiment.

Most people I talk to want to hear what the Pulsepod measures. (Short answer: a lot.) But the thing we set out to do right more than anything else is make it easy to collect data in the field and get it online so it can be analyzed. It requires no zip ties, because it has a mount built in. It has no cable to plug in to download, because every one has cellular, wifi, and bluetooth radios to connect with the GSM network, your local network, or your phone. You see immediately if the data is being collected and if it is good quality so you can walk away. You will never have to waste time writing a datalogger program or wiring stuff up. It has no wires to wire up! It has its own battery and solar power, so cross that off the list. And because all the power, logging, and sensing is in one little package you don’t need a pole with a lot of mounting hardware. All the data goes online so you can know when things aren’t going as planned. It has tilt, and level, and GPS so you know if it’s knocked off position or even stolen. (For that matter, you can find it again even when it’s not stolen). The spectrometer tells you if the diffuser is covered with gunk like corn pollen.

How about this one: no spreadsheets. Yes, you can download a spreadsheet, and browse it like we all do. But I’m saying you don’t have to ask around, “Hey who has the current spreadsheet?” We have built up a set of developer tools so you can always access the current data, and build more sophisticated analyses over time. Share access to someone else with a click, or revoke access just as easily.

I thought I would have more mixed feelings over my breakup. I want to be clear — I am better off for having dated my old weather station, but it’s one of those situations where I am thanking my lucky stars we did not get married. Because instead of wasting all that time and energy pulling my hair out, I’m thinking of the possibilities of where do we go with Pulsepod. We’re working on irrigation applications over here, nutrient management over there, some drone ground truth, and then getting into insurance and even distance advice for smallholder farmers around the world. The desire for easier data for ag and natural resources is so immense, and the lack of this data is holding up important progress on food security, water management, drought and flood response . . . the stuff that keeps civilization on the road toward peace and prosperity.

Learn more about the next generation of Pulsepod, the Arable Mark, at arable.com.