The process by which water is transported to the atmosphere, away from leaves and soil is called evapotranspiration, or ET. Water resource scientists, growers, and land managers are highly in-tune with this “vital rate” of plants, because ET has impact on a wide variety of performance indicators. Besides simply being the amount of water you would need to replace in the ground through irrigation, the inability to satisfy ET leads to reduced photosynthesis in row crops, wilting and postharvest in leafy greens, slow rates of fruit growth, indicates potential root pathogens in many crops, and leads to increased incidence of insect damage owing to reduced health. Not all reduced ET is bad though: deficit irrigation, or irrigation below ET demand, is used to accelerate fruit development and improve quality, particularly sugar (brix) and color.

Following World War II, there were three major contributions to understanding the nature of ET, and what impact ET has on plants. Thornthwaite (1948) (doi:10.2307/210739) published a simple equation that used only temperature data from weather stations across the globe to estimate ET at a monthly resolution. It works — — kind of. At that time people were just coming to grips understanding how plants worked, and recognized that ET played a fundamental role in where we find forests and grasslands. Leslie Holdridge (1947) (doi:10.1126/science.105.2727.367) had just published a diagram for how to understand all the biomes on Earth using the ratio of ET to rainfall received.

We see agriculture right along the line where ET matches precipitation, where we see the steppe (or grassland) of the Midwest, and of course the moist forests of the east coast and Europe which were largely converted to agriculture in the 19th Century. California is a bit of a desert or dry forest, but then there is irrigation to address the lack of rain.

Howard Penman in 1948 published the foundation for the model of evaporation that is the basis for most work we use today. Rather than the simple formula of Thornthwaite, whose goal was to use readily available data, Penman derived the fundamental physics of evaporation, which is driven by energy arriving by the sun and sky, along with the temperature and humidity of the air. Penman’s complicated formula just says what is intuitively true: if it’s sunny and warm, there is more evaporation. If it’s humid out, it’s hard to evaporate to cool off. That’s basically it. 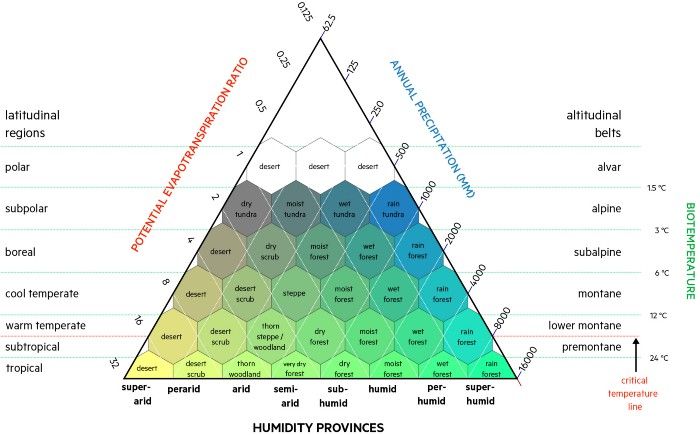 The big sources of variability are the radiation budget, canopy cover and plant water stress.

Somewhat later, John Monteith of Rothamstead Research Center of the UK extended Penman’s idea to include not just the amount of energy driving potential evaporation, but also the limitations on evaporation imposed by plants (which may be stressed or even absent) or wind (which could be still, or extremely desiccating). He also explored the importance of thermal radiation in the energy budget (which is often larger than the solar radiation), along with the annual cycle of ground heat flux, which absorbs energy in the springtime (reducing ET) and releases it in the fall (enhancing ET).
What does the subscript mean?
The little subscript next to ET, turns out, is quite important as it tells us a little bit about what approach was used to calculate.

ETa means “actual ET”, which in this context refers to what is leaving the surface of the earth. We could start to get kind of philosophical here in our interpretation of the word actual, but let’s just say that unless you are measuring the water vapor molecules directly, using the term actual seems like a bit of a stretch. Eddy covariance is a direct measure but lacks energy budget closure and is prone to all kinds of errors, especially in permanent crops. Surface renewal works in much the same way, using turbulence, but suffers from other errors because it does not measure the radiation regime or water flux itself.
ETo is a “reference ET”, a conceptual value for what would be evaporating off of a surface, “assuming well-watered conditions and a canopy of uniform height and coverage.” CIMIS is a well-known source of ETo for growers in California. It assumes the plants are not water stressed, and to be used for practical purposes needs the grower to look up the canopy cover from a table.

ETc is a “crop ET” which is simply the reference ETo multiplied by a crop coefficient (Kc) ranging from 0–1 representing the variety, how it was planted, and the stage of its canopy development. If you got no crop: that’s Kc of zero. Full canopy is 1 or maybe a bit more. Kc is simple in concept but complicated in practice: planting density, bed width, crop stress, growth rate all have some impact, and it has been characterized rigorously in a few experiments. In practice, most people use the “eyeball method” to guesstimate Kc. 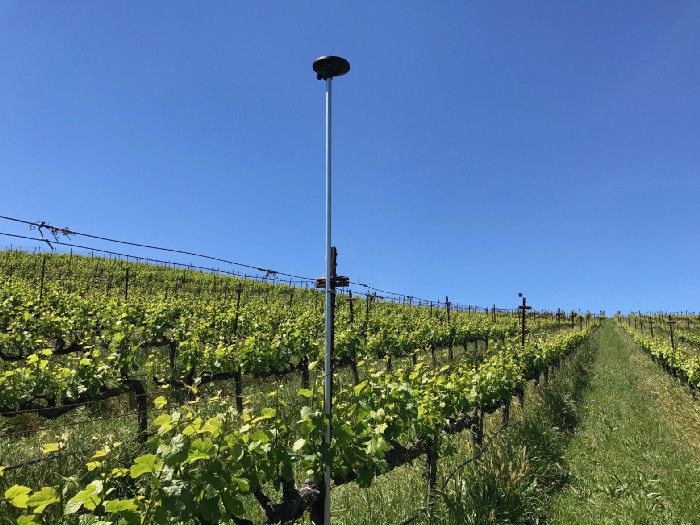 Besides measuring ETo using the full radiation budget directly (the largest potential source of error), Arable measures the crop canopy (Kc) directly, as well as crop water stress, which all add up to a very sensitive measurement of ET in real time.

What is Arable’s ET?

Arable ET is ETc calculated from the total energy budget measured at the site. We use Arable’s unique machine learning (ML) model to predict reference evapotranspiration (ETo), which makes use of localized environmental variables measured by the Mark 2. The feature inputs into this ML model are loosely based on the variables in the FAO Penman-Monteith equation, which was originally introduced by the pioneers Howard Penman and John Monteith and adapted by the Food and Agriculture Organization (FAO) and American Society of Civil Engineers. But we take advantage of the power of ML models, which can often achieve greater accuracy since they are able to account and correct for sensor errors as well as capture patterns that inflexible physical models do not. Besides measuring ETo using the full radiation budget directly (the largest potential source of error), Arable measures the crop canopy (Kc) directly, as well as crop water stress, which all add up to a very sensitive measurement of ET in real time.

If you’ve ever used satellite or UAV remote sensing imagery to generate a crop coefficient for your ET calculations, you’ll be familiar with the use of a spectral vegetation index to calculate Kc. Vegetation indices are a measure of canopy cover, making a direct link to the definition of Kc. In the case of perennial crops, a measurement of light absorption above and below the canopy enables a measurement of canopy cover that factors out cover crops and row spacing that compromise remote sensing.

The crop water stress is the final ingredient: the canopy temperature (relative to air temperature) is a direct measure of the valves that plants open and close to let out water. Whereas a CIMIS station represents a well watered crop, where the limitation to evaporation is the breeze, in reality crops are never “well watered,” instead experiencing moments when they’re inundated with a fresh irrigation, and then slowly drying down afterwards. We can measure crop temperature as the “pulse” of the plant to know just how stressed it is, and use that to make quantitative decisions.

What does that all mean practically? No assumptions about the radiation budget, no lookup tables, no idealized conditions that are rarely met in reality, all in one little package that takes a minute to install.

Besides measuring ETo using the full radiation budget directly (the largest potential source of error), Arable measures the crop canopy (Kc) directly, as well as crop water stress, which all add up to a very sensitive measurement of ET in real time. 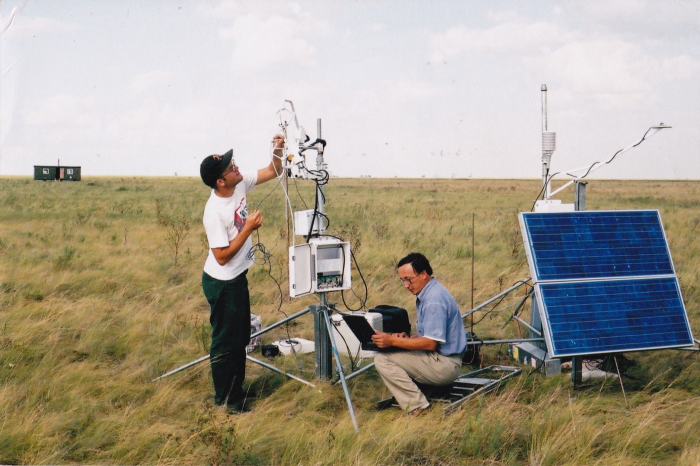 Aside from a severe burden for equipment cost, installation, and data processing…Read more

How does this compare?

There are some other high-caliber tools such as eddy covariance and its second cousin by marriage, the surface renewal method. Eddy covariance has an (undeserved) reputation as a “gold standard” method for direct measure of the water vapor content in short-lived turbulent motion above the canopy. Aside from a severe burden for equipment cost, installation, and data processing the measurements aren’t that good: the assumptions that the terrain is flat, the canopy uniform, the tower tall, the energy balanced closed . . . these are rarely met except in idealized circumstances.

Surface renewal is a clever method: when NASA scientists were dreaming up how to measure the fluxes of heat on the moon, they developed a technique using just a simple thermometer to measure the turbulent exchange of warm air. Converting this over to measuring ET though is not without its challenges: it requires an estimate of shortwave and longwave radiation to estimate the total energy to be dissipated, and subtracts out the surface renewal to arrive finally at the ET number. So in a very real sense, the method depends closely on how well the radiation budget is measured.

Vineyards and other specialty crops in microclimates are often located on slopes, since these conditions often yield the highest quality yield, but it is under these conditions that the methods are presented with challenges.

There are a variety of other methods for estimating ET using remote sensing snapshots of canopy cover and canopy temperature, but these suffer from the same problem: without a measure of the radiation budget, there are poor bounds on the total amount of heat loss and ET. It’s as though I offered you half the contents of my pocket: half of what?

And finally there are a few methods that use weather stations or crop temperature monitors for irrigation management. The weather station method measures one component of radiation (incoming sunlight) but none of the other components. Nor does it measure canopy cover or crop stress. Crop temperature monitors also measure one component of radiation (upwelling thermal radiation), but none of the others, and tends to be either a qualitative measure of crop feel, or simply trigger an alert above a threshold. Either way, these are at best correlated with ET and not quantitative measurements.

So even though we live in a world with these tools available, most of agriculture still uses the tools created by the pioneers of the 20th century: a shovel to see if it’s wet down there. Why? Everyone has a shovel! Obviously the world is still turning and crops are still growing. The problem is that water is increasingly a commodity, which can be bought and sold and otherwise shows up in the P&L for a farm budget, and has asset value attached to the land. What’s more, manipulating the water budget can increase yields, influence quality, and force timing. A shovel makes it difficult to scale to 20, 100, 1000 sites and also contributes to lack of accessibility and transparency across an organization. Having the ability to quickly check the ET measured across your operation without having to go into the field is quite the time saver.

What do we think at Arable?

Around our office, we talk about ET constantly (some say too much) and spend most days collecting field data to validate new ideas for how to benefit from these measurements. We recognize the tremendous value that the pioneers have created but we also want to help push forward in a meaningful way. In the end, if the data doesn’t get used (difficult to set up or interpret) or is not trusted (unvalidated methods, suspect site-setup), then for what purpose was this whole exercise? Who benefits? Our goal at Arable is to make this whole process easier, so that the people who care can use the data to help them do what they do best.