Piers Sellers passed away just before the end of the year, leaving many people with the last week of 2016 reconsidering his impact on their lives and on society. I saw him speak once a few years back, at AGU, but the room was so crowded with his old friends and colleagues that I could never manage to get close to him. He looms especially large in the imagination of Earth scientists, recalling an epitaph I especially like:

Here lies Marcus Aurelius Sabinus, also called “The Little Rover”. A most beloved man whose way of life outshone by far the young men of his own rank and age.

Piers Sellers set off studying the function and form of plants in Earth’s system. Far more than most scientists, his career was marked by the interplay between rigorous mathematical theory and ambitious tests of the theory. But Sellers’ genius stretched far beyond, as he instrumented entire continents and ultimately the planet itself, first as a staff scientist for NASA, later as a bonafide astronaut, and finally as Director of Earth Science of the Goddard Space Flight Center.

The earliest paper of his that I reference is from 1985, titled “Canopy reflectance, photosynthesis, and transpiration.” This work is foundational to all work that makes use of satellite, drone or airborne data to understand plant growth. Startups like Planet Labs, Mavrx and Precision Hawk have built entire companies around interpretation of maps of the Normalized Difference Vegetation Index (NDVI). Sellers showed that remotely-sensed light absorption from the sun was quantitatively linked to plant function, that is photosynthesis and transpiration, and not just form, that is standing crop biomass.

Sellers’ work went far deeper than showing that “this spot is green” and “that spot is brown,” as much of this work is presented today. The main insight we take from this work is that (1) canopy photosynthesis and transpiration are linearly related to NDVI, but that (2) the actual amount of photosynthesis and transpiration depend on both biotic and abiotic drivers. Measuring light absorption is critical, but to get the complete picture we need to measure temperature, humidity and others, as well as biotic constraints, such as leaf photosynthetic capacity or stress.*

At Arable, Sellers shows us that an effective tool for measuring and predicting plant growth and water use must measure both the slowly-changing state of the plant canopy (that is the NDVI), as well as the time-integral of the abiotic drivers of photosynthesis and transpiration (light, temperature, humidity, and others). Bonus points awarded for measuring other biotic factors like leaf chlorophyll or water content.

Sellers went on to be a leader in several profoundly important scientific efforts: FIFE, SIB and BOREAS.

FIFE was an observational effort in 1987 that made use of Sellers’ theoretical predictions linking satellite measurements of vegetation with plant growth and transpiration. It’s worth thinking about how observational and descriptive ecology was at the time to understand what a profound conceptual shift it was to cordon off a 15km x 15km square in the Kansas prairie and to use the “total annihilation” approach to measurement and instrumentation: 16 weather stations, 18 flux towers, atmospheric sounders, an army of handheld devices, 4 satellites, 3 planes, and an actual Huey.

Sellers expanded on his theoretical work for the next decade in his formulation of the Simple Biosphere (SIB) model in 1986 and ultimately the revised SIB2 in 1996. This modeling effort became an important focal point bringing together atmospheric scientists from Colorado State, plant physiologists from the Carnegie Institution, and NASA scientists at GSFC to create a complete picture of land and atmosphere as seen in its totality: from space.

Among other things, this work helped form a nuanced understanding of the interaction between land and atmosphere. Those clouds you see? That water was pulled from the soil by plants yesterday! That fog that keeps the lettuce crisp? It wouldn’t be there if you took out the lettuce.

SIB insights generated entirely new hypotheses about our natural world, and radically increased engagement around land-atmosphere interactions within the scientific community. In 1994 and 1996 two field seasons of BOREAS were held, again creating a mountain of data for testing all manner of processes that control the water, carbon, and energy budgets of Earth. This time the study area was expanded to 1000 km x 1000 km and included an order of magnitude more measurements and participants: 80 sites for process studies and 85 science teams across 10 federal agencies of the US and Canada.

Before leaving in 1996 to join the Astronaut Corps, Sellers achieved monumental successes in bringing together experimentalists and modelers and generating new ideas of how the Earth actually works. Recall that his foundational work predates MODIS and the other radiometers launched on the Terra satellite in 1998, as well as the commercial satellites IKONOS and Quickbird launched in 1999 and 2001 … it is impossible to imagine the current explosion in remote sensing of crops and forests without Sellers’ fundamental work bridging theory and empiricism on plant form and function.

At Arable, we see this body of work as the jumping off point to continue filling in the blank spots on the map where our knowledge remains very thin:

We believe it is important to empower people to measure and manage their own lands. We’re building tools to measure how this variety grows differently from that other variety in the same field, how this same variety grows differently when it is in a different microclimate, how the weather unfolds in Parlier, Paraguay, Pakistan, and a thousand other places, and putting these measurements to use in managing this complex world we live in. We are forever grateful for the thought leaders like Sellers who have built the foundation of this understanding that we can continue to expand on. 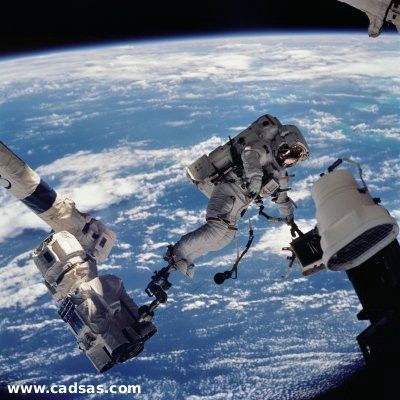 Photo of Piers Sellers from a previous mission on Space Shuttle Atlantis (STS 112) in 2002.