At Arable, we are always talking about what we are doing right, how we can do better, and ways we can measure the difference. It is fun to meet others with a similar mindset towards sustainable farming. Here we talk with some of the viticulture team at Tablas Creek to learn about their vineyard, livestock practice, Demeter certification and, of course, their sheep. 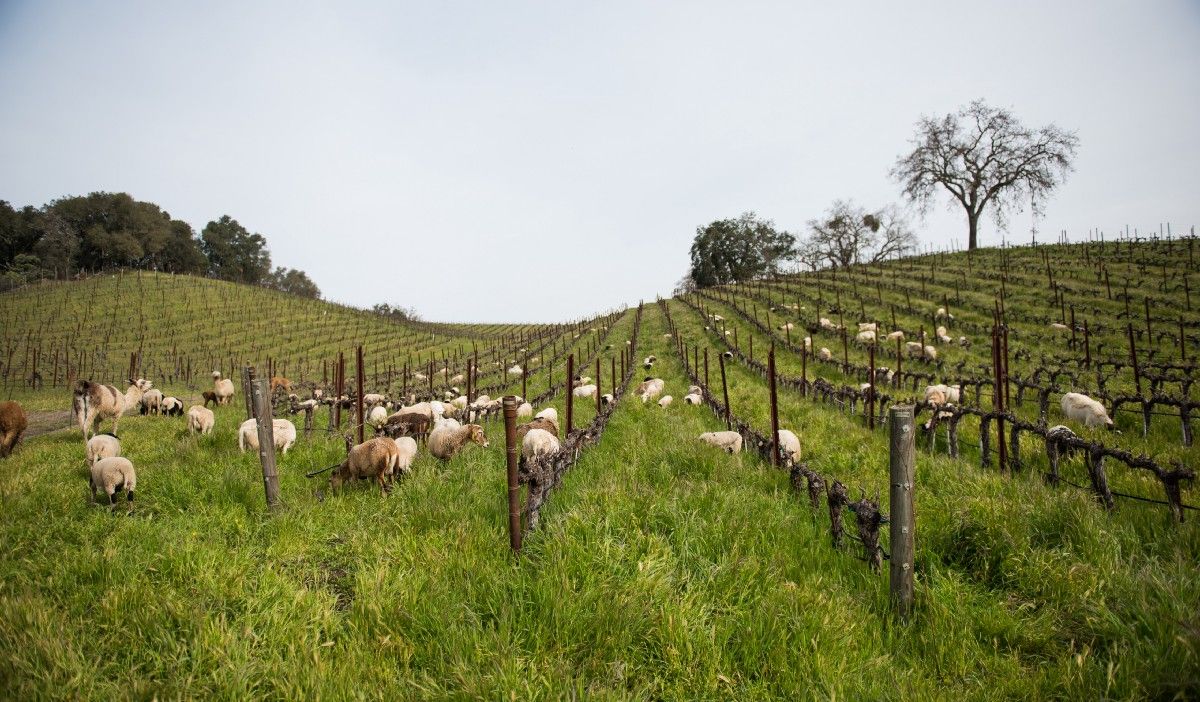 Ruminants among the vines at Tablas Creek Vineyard (photo by Brittany App).

Arable Labs: It has been a wild season for California winegrapes; finally the end of the drought, record-breaking heat spikes at the end of August and early September, and then the horrific fires all across Napa last month.

Tablas Creek: Yes, we had 43 inches of rain this winter; Rocky Butte two ridges over from us had 90 inches! There was water bubbling out of parts of the soil in some places. If you look on a map, our property is about 13 miles from the Pacific Ocean covering about 106 planted acres. Roughly 70 percent of our acres are irrigated, the rest dry-farmed. Our irrigation setup allows us to farm the vine and manage grape cultivation on a vine-by-vine basis. Because of the ample rainfall and complete soil profile, both the clusters and berries were slightly larger than in years past; we had to drop a good amount of fruit and our yields were still 30 percent higher than average.

AL: What were the challenges this season?

TC: The heat wave at the end of August really caught us at a hard time within the season. We had an amazing amount of fruit, but we were not at the right Brix to harvest in advance of those spikes. It was strange, over those days some varietals didn’t just shrivel, they completely deflated. Second to the weather anomalies was the powdery mildew — the pressure was higher this season. Powdery mildew does best in a humid environment, and with the rainfall, cooler spring, and the enormous size of the canopies this year, the conditions for disease outbreak were ever-present.

AL: I have to ask about the sheep first. How did they help over this season; can you actually see the difference in productivity of the yields?

TC: This year, we had a little over 100 sheep. But you have to think of the sheep as tools (similar to a disk or a wheel) for building the soil and the microclimate for the grapes. Our sheep program has been ongoing for about 5–6 years now. We started out with ten sheep. It seems like it would be easy, but really if you’re not moving them correctly relative to the vegetative growth of the grass, you’ll end of with a mob grazing style — where they over-graze certain sections and under-graze others — and what we really want is more rotational grazing. So, we control their access to different sections and move them on a coordinated schedule. Last year we were able to graze every block, and many blocks twice, because we moved the sheep through fast enough. This cuts down on our number of tractor passes and costs of labor, as well as the amount of fertilizer.

AL: I’ve just started learning about holistic rangeland management and how cows can detect changes in the micronutrients of grass, is it similar with sheep?

TC:Think about if you just ate grass all day long, you would know the good stuff! But more importantly, there have been new studies out recently pointing to how grazing animal saliva helps build immunity within plants. We want to achieve this balance with the plants and with the soil, where there is competition, but that competition makes our vines healthier, more vigorous. With the amount of grass consumed by the sheep, they are packing on about a half pound every day in protein. In total, 10 to 15 percent of the consumption goes to that protein, the other 85 percent becomes manure, or essentially fertilizer, for the vines. We want to develop a really rich, living, diverse soil ecosystem.

If you think about the humid tropics and the amount of biodiversity they have, there is always competition between the plants and soil. You’ll also notice that in the tropics they have less ruminants, whereas in more arid regions we rely on herd animals for microbial transport. This is because ruminants (such as sheep) have four stomachs, making them great incubators for microbial activity. They help microorganisms found in the soil during wet times of year to survive the dry summers. The animals then inoculate the ground the following spring, improving that critical layer of topsoil.

Before World War II, everyone practiced integrated livestock management. The invention of NPK (modern fertilizer) allowed the transition towards monoculture, and what we see now if we think of ‘Food, Inc.’ But finding the balance is important for long-term sustainability, and ruminant animals play a key role in achieving that balance. 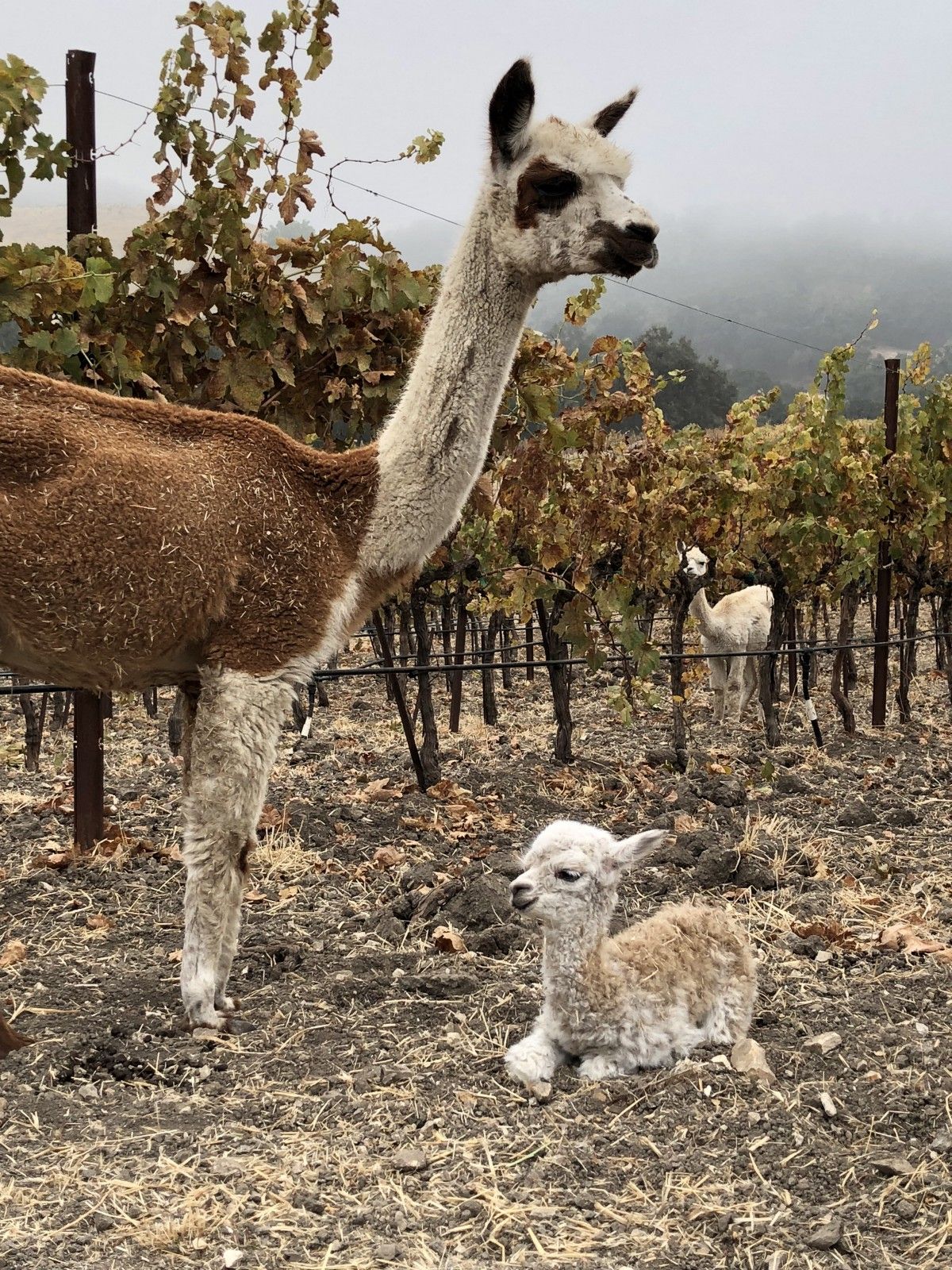 They also have alpacas (photo by Jordan Lonborg).

AL: If a vineyard wanted to introduce sheep or an integrated livestock practice, is it difficult? Where do you start?

TC: Keeping sheep alive is actually quite challenging; they are kind of like owning goldfish. They are very susceptible to pneumonia and the golden eagles in the area will even carry them off whole sometimes — it’s crazy to see. As a beginning shepherd, don’t be discouraged by losing an occasional sheep. But they do also produce an average of 1.5 lambs per year, and it’s worth it because of the important role they play in fertilization, acidification, tillage, getting the right balance with cover crops. Maybe even more important is to manage where the herd grazes and to keep things moving. Soil compaction is a challenge with sheep, especially for a beginner.

Along with the sheep, we have a fruit tree for every acre of grapes, we generate our own compost, make compost tea, and practice beekeeping. There are 30+ owl boxes on the property used for biological control and multiple gardens planted on a yearly basis to attract beneficial insects and provide a food source for the honeybees. We practice carbon farming, where essentially we are trying to build the amount of carbon in our soils, rather than the air, as carbon-rich soils both draw and hold water. We are trying to shift away from monoculture as much as possible (folks often overlook that vineyards are a form of monoculture!). We’ve been certified Organic since 2002, and as of this year, a Biodynamic property through Demeter. Attaining the Biodynamic certification took us to a whole different level. The hardest part of the certification process is always the paperwork, getting the complete field history of inputs, and then quantifying how long it will take to get those inputs out of the ground.

AL: Do any of the larger vineyards have Demeter certification, and have you seen an impact in the wine?

TC: Yes, check out Benziger, Roederer Estate, Frey Vineyards or Beckmen. So, there are different ways in which we see the farming have an impact in the wine. We do think we taste the terroir — the signature of our place — more clearly in the wines the less we put onto the vineyard from the outside. And we feel confident that the vines will be healthier and live longer than they would have if farmed conventionally, which means more old vines, fewer young vines, and more concentrated flavors.

Overall, we see viticulture and the vineyards playing an important role in the sustainable food movement. We ‘shrink’ our herds at the end of the season, and that meat goes to the Larder Meat Company and local restaurants. Many people will stop by the vineyard because they are curious about the sheep — and we hope they will see what we do as a model for what is achievable with the right practices in place. 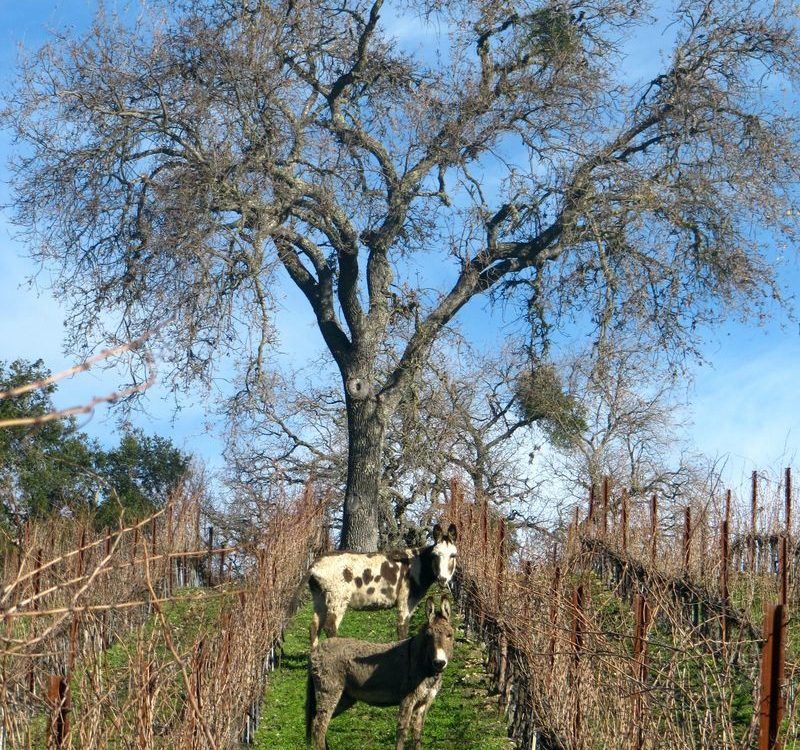 And a couple of donkeys for good measure (photo courtesy Tablas Creek).

Jordan Lonborg is the Viticulturist and Nathan Stuart is the Shepherd at Tablas Creek Vineyard.