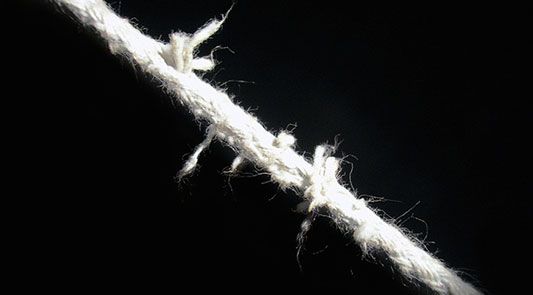 Every viticultural student goes through some period of hazing called “Water Potential.” What on Earth is water potential? — the student scratches her head. Every hydrology student has been made fun of by their uncle joking, “You took four years to learn that water flows downhill? HAR!” And the retort is that this is not strictly true: water flows from greater to lesser potential, and sometimes that is up. Every morning I take a hot shower and pour a cup of coffee from my second story kettle and thank Providence for water pressure. And sometimes I look out the kitchen window to the trees — some of them 20, 40, 50 feet high — every single leaf is fed water flowing straight up from the soil.

Or more properly, pulling. If water on the ground is sitting at zero potential (lazy bumsky), that leaf has to have a negative potential for water to get up to it. Where you stand, the atmosphere is at a pressure called “one atmosphere.” That unit is also known as “one bar.” If you buy an expensive pump and a special chamber, you can remove all the air out of that volume and create a perfect vacuum: that is zero bar. Now get this — a plant’s leaves hang out at anywhere from 5 to 15 times that amount of vacuum, or negative potential. Vegetation rioted upon the earth and big trees were kings.

Now imagine this severe pulling — which is actually just the desiccating power of dryish air — right next to a tender little plant cell. Why doesn’t the cell just implode? Its molecules are salty enough to pull water into itself just as much as the vacuum outside is pulling out. When the cell is close to zero water potential, then we have an equilibrium where all the cells are happy and swollen and the leaves are alert and the plant is humming along. But as the desiccating force of the air begins to overpower the supply of water from the soil, those cells can’t compete. They start giving up their water, becoming flaccid, leaf wilting. Who doesn’t know what it’s like to be pulled in two opposite directions? Unfun. That is negative water potential.

This would all be quite academic if it wasn’t directly related to something we know and love: good wine. Somewhere in the 1980s, Mark Matthews and other clever folk in the Viticulture and Enology department at UC Davis were looking at water deficits on manipulating the composition of wine grapes, and found that imposing water deficit at certain stages would alter the chemistry that produced the color, flavor, and mouthfeel of the wine.[1][2] At the time, people were placing their bets on soils — terroir — and plant genetics to determine flavor, and this water-based approach offered a new window into producing premium California wines.

Meanwhile, at the other end of the hall, Don Grimes and Larry Williams were investigating the use of water potential as a means to quantify water status, or the amount of water present in a plant system relative to its health.[3] This was laborious work involving a fifty pound “pressure bomb” developed by Frederick Scholander. The contraption imposes unimaginable pressure on a tiny leaf captured in a heavy duty steel chamber by pushing water out backwards towards the stem. 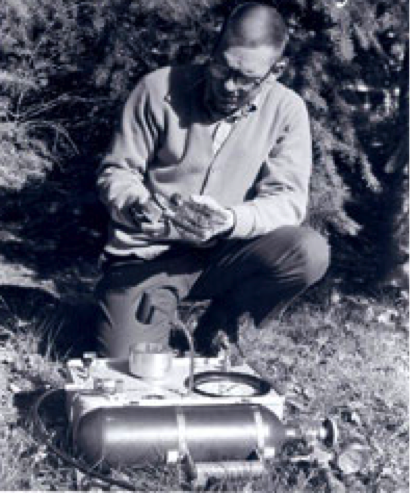 In the best spirit of Cooperative Extension, we now had an adjustable valve to grow better grapes, combined with the discovery of a ‘thermostat’ one could manipulate to achieve a target water status. Thus was born a minor industry of interns and highly trained professionals alike driving up and down California, peering through a tiny magnifying glass at bubbles emerging from the butt end of a leaf, hoping to God that the thing would not blow up (none ever did).

We have learned a lot of things about water potential in plants since those days, both complicated and not — from imploding cells, to stomatal valves, to movement in the soil, and all that.[4] But, back in 1990, Williams and Matthews together wrote a book chapter that pointed out, “By taking into account diurnal variation in radiation, temperature, and leaf-to-air vapor difference, 75 to 96% of the variation in leaf water potential could be explained in a linear model.”[5] As a data analytics company, we at Arable could only interpret this one way: Challenge accepted.

So last year, we took piles of pressure bomb readings (Mark Greenspan, an alumnus of Matthews’s lab, contributed a great deal as well). We plotted these against measurements by the Arable Mark and found that, sure enough, it’s true! 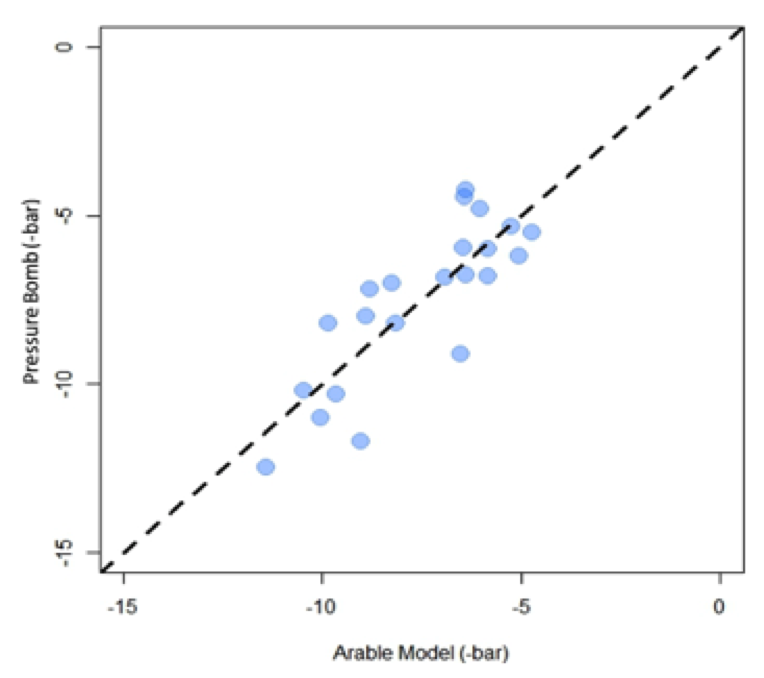 There’s a few ways into it, but the short story is that with good knowledge of net radiation (Rn) and the leaf-to-air temperature difference, leaf water potential can be back-calculated. With a couple automatic measurements taken as the sun rises and the leaves warm up, one can determine what the pre-dawn water potential is, which can be used as a proxy for the soil water potential.

Arable certainly didn’t invent taking leaf temperatures. But we’re proud to be the first to bring all these measurements together into one simple device, standing sentinel through gloom of night to monitor vine stress on every block, seven days a week, in all weather. I know many of us have fond memories of being up at 4am taking pressure bomb readings, but this is one of those areas of life where up to 95% accuracy is worth a good night’s sleep. 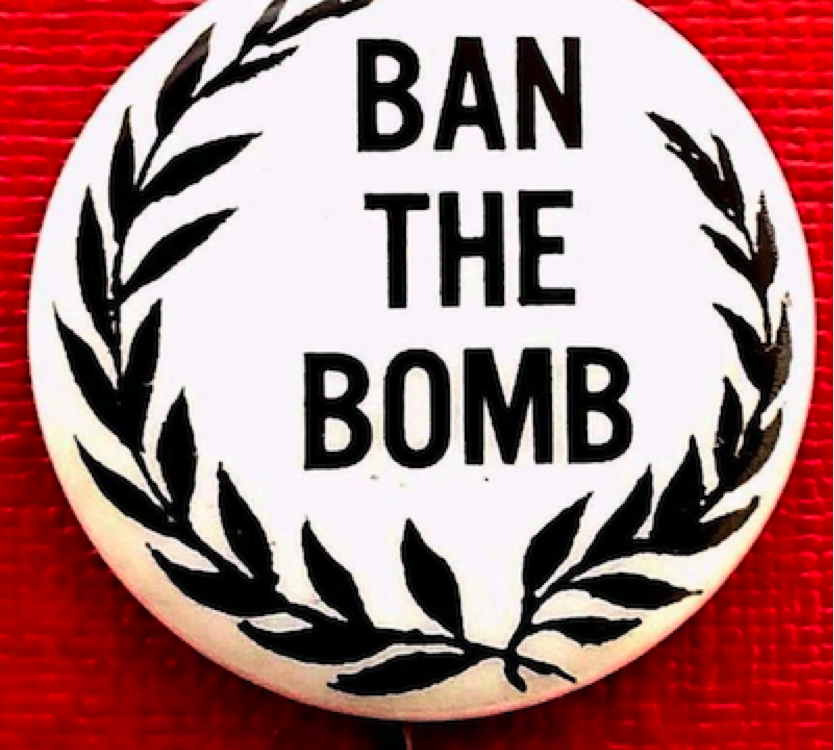 Adam Wolf is the CEO of Arable Labs, Inc.