Adolfo Meneses is CEO of AGInnovaTech, the decade-old Costa Rican crop protection company with operations across the Central American and Caribbean region. AgroInnova keeps a laser focus on developing sustainable products for their clients using cutting-edge technology. Adolfo has worked for more than 25 years in agriculture, with both small, local companies and large, global agribusinesses, and is considered an expert in his field. Arable’s Jess Bollinger and Walter Jove work very closely with Adolfo, developing custom analytics that suit his clients’ operations growing specialty crops in a tropical climate for a global market. Their conversation with him ranged from his origins, the Costa Rican and regional agricultural landscape, and what he sees as important issues for the industry in the coming years. – Jamie Hardy
Arable Labs: Tell us about yourself Adolfo. How did you get into agriculture?

Adolfo Meneses: I have been in the agricultural business for 25 years, and I come from a family of cattle and potato producers. I was basically born on a farm, and am almost always in contact with farm producers in some way. That’s how I got involved in the business—I studied agronomy and got a masters in business administration with an emphasis on marketing, with the dream to grow a company specialized in bringing agronomic products and technology to the market. We started AGInnovaTech about 10 years ago to do just that, and that’s how we’ve found Arable. We’ve been using Arable as a high-tech prediction tool for people who work with crops in the field to make good management decisions. 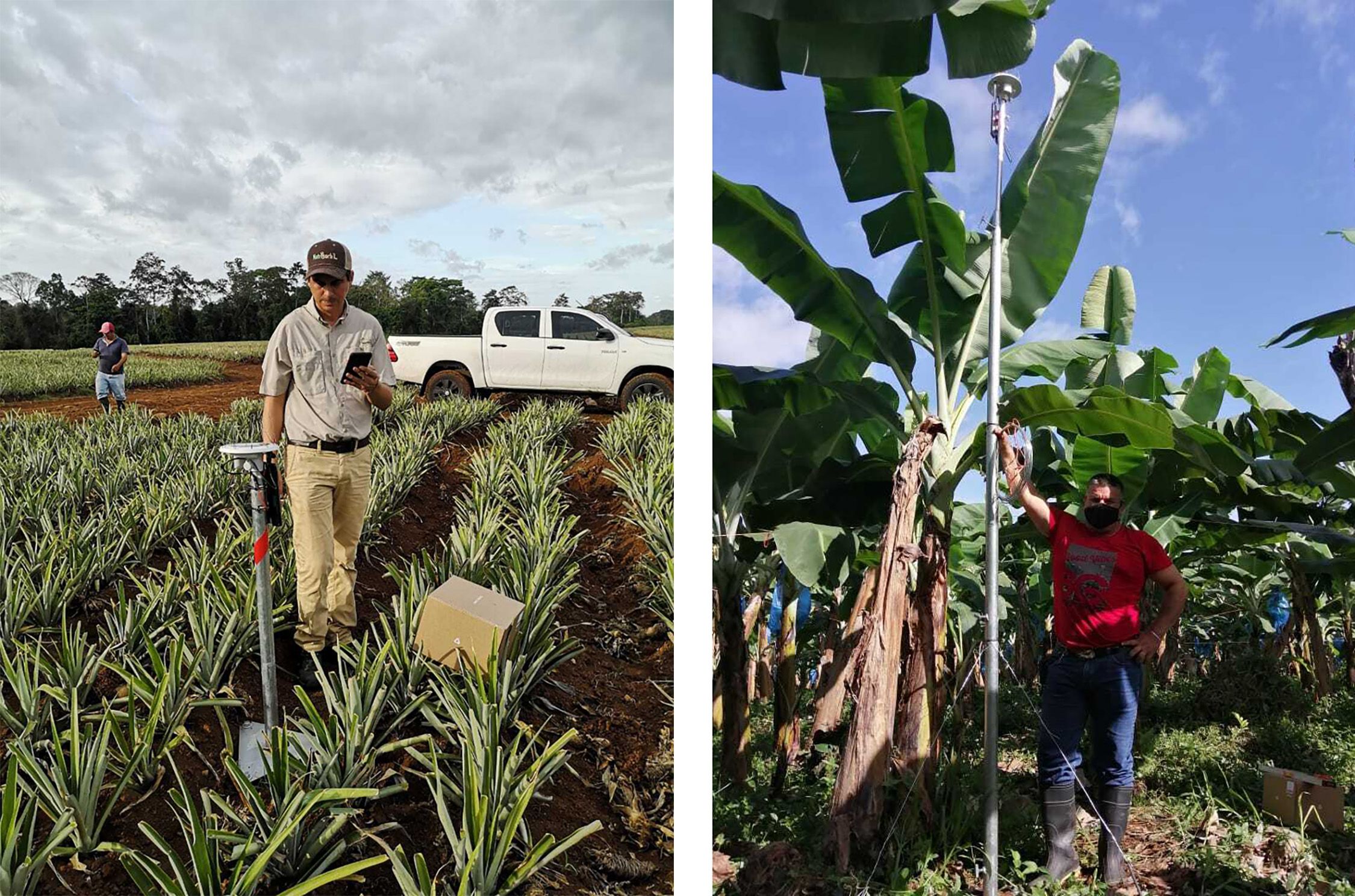 AL: AGInnovaTech is based in Costa Rica, a tropical country in Central America that gets a lot of rain. What kinds of crops are people farming there, and how are they grown?

AM: We have areas that rain 4,000 mm a year—that’s a whole bunch of water. There’s two seasons, which we call summer (from December to late April) and rainy season (we don’t call it winter). In the rainy season, there is a lot of crop activity.

The most important crops in Costa Rica are bananas, pineapples, and coffee which we export to the whole world. Pineapple producers average around 3,000 ha each, banana producers around 8,000 ha. The biggest independent producers have around 14,000 ha of bananas, maybe 12,000 ha of pineapples. We’ve been growing bananas for more than a century, and have developed a coffee culture—we grow specialty varieties of coffee and export to many markets in the world, like Japan, EU, the US. Coffee is mostly produced here by small farmers, many with 10-20 hectares, and some big producers with 2,000 hectare plantations.

After these three principal crops, we have veggies, melons, plantains, mangoes, rice, sugarcane. Sugarcane is a very important crop in Costa Rica. In our tropical region, if you come more to the south of Central America there will be more rain, but if you go north there will be less. And in Guatemala, most of the banana plantations are in the Pacific side, whereas in Costa Rica they are by the Caribbean.

AL: What are some of the growing challenges Costa Rican growers face?

AM: We have a lot of trouble fighting the Sigatoka disease in bananas; in pineapples, Fusarium is a big problem, and so is keeping them naturally flavorful.

Cold weather negatively affects the flavor of pineapples; we have seen the effects of climate change during three critical months of the year (October-December), when temperatures sometimes drop from 30-32 degrees C in the daytime to 15-16 degrees C overnight, sometimes as low as 12 degrees, in areas that wouldn’t typically get cold before.

If we knew what exactly affects the flavoring, we’d be very rich. The producers use plastic film to keep the cold from affecting the roots. Some other producers chop the leaf with a knife so the plant has less biomass to suffer in the cold. For some, it works; for some it doesn’t.

Costa Rica is a very humid country, and we have high temperatures and relative humidity over 80% sometimes—great conditions for fungal diseases to spread in the crops. Banana producers spend a lot of money trying to control Sigatoka, as often as once or twice per week. In sugarcane, you have a lot of weeds in the crops because the rain is good enough to keep the weeds growing too. In coffee, we see the roya in some highly affected areas.

Arable in an AGInnovaTech pineapple field. With Arable in pineapples, for example, you can see how much water is in the leaves, the salinity of the soil, the levels of light and of NDVI. Photo courtesy AGInnovaTech.

AL: What kinds of technology are people using to address these issues?

AM: We have seen a big agricultural producer invest in drones to make foliar applications and to measure the field. We also see people using drones to gather fertilizer data to identify NPK needs in the field. We make up to 60 sprays in a hectare over a year, which is the maximum allowed. Every application needs an expensive airplane to fly over and apply a product that is not good for the environment. If you can use Arable to monitor the plant data, you can make better decisions on when to apply and when not to apply; if you can use data to extend each interval between flyovers by an extra two weeks, you will spend less money for the same crop outcome.

When we show clients Arable, everyone wants to try it and are impressed at how much data can be collected with such a small piece of equipment, and one that can be moved to any part of the field, too. More people are starting to use data to make decisions in the field. In this region, I see more people starting to assess soil water needs and salinity, which is something they haven’t been able to do so easily before Arable.

AL: What other issues do you see coming on the horizon for Costa Rica?

AM: The big challenge for next year is figuring out how to feed more people with less land. We are blessed here in Costa Rica with so much water; most is used to produce energy and for other non-agricultural sectors. I see water monitoring becoming more important soon. Since our main business in agriculture is globally exported tropical fruits, which come with their own regulations and certifications that apply to their suppliers, the suppliers are working to reduce water use in the crops for the certifications. I’ve seen this gain importance in just a short time, already changing how folks do business and manage these resources.

Exporting specialty food like bananas and pineapples to places like Europe with strict environmental policies means that technology and precision agriculture will make food more affordable and healthier in the future; you won’t have to use as much fungicide and insecticide over the year, and you make better crop management decisions. As a result, I’m seeing more and more people seeking new equipment to make decisions in the field.

With Arable in pineapples, for example, you can see how much water is in the leaves, the salinity of the soil, the levels of light and of NDVI. The challenge now is to teach farmers that there is a need for them to make data-driven decisions; in the future, the farmer will say, We need Arable for sure, because we’ll have the data we need to make the right decisions.

Out of 5 million people in Costa Rica, around 1 million people are involved in agriculture. In the past, the biggest export was bananas and pineapples; now the government is pushing for global companies to come here to produce software. We have Google and Amazon here; they are not motivating new people to do agriculture.

AL: What does this mean for the future of agriculture in the region?

AM: I see Central America as a very small country because every area is very close; you can take a bus 8 hours to be in Salvador; in a plane it will take 45 minutes, or an hour to get to Guatemala. We have different cultures in some places, but the crop mix is the same. Most of the countries have coffee producers; if you see Costa Rica as one country and compare it with Colombia or Mexico, it’s like a little state. Companies like ours have to take more of a regional approach, including CR, Panama, Guatemala, Puerto Rico, Honduras too. In 2022, we will be in Domincan Republic as well. We can share all the experience we have gained in Costa Rica with others who have expertise in the same crops, bananas, pineapples, sugarcane and coffee—the difference is the country, but the knowledge is in the same crops. There may be some variations in climate—for example on the Pacific coast, it may be more dry and require fertigation because there is less rain. But we can collaborate across a team of professionals across the region, and share knowledge.